Missing the beach! The weather’s a total pain in the ass for my allergic rhinitis because it’s the transition from summer to rainy season. I’ve been bitching about itchy eyes and nose for days now and I’m pulling out the final weapon I have in my stash: Antihistamine. 😦 So since I wanted a pick-me-up post, I decided to share a beach trip we did last June in Zambales. The #coolkids are back! Missing my hubby but we are with a new recruit. 😀

We went there June 22 which was already nearing the end of summer. The weather forecast a few days back told us that there will thunderstorms that day. We bought stuff at the local market for our stay and did a quick drive thru at Jollibee for our lunch meals. We arrived at Limliwa Beach Resort around noon and ate in one of the kubos. We got a 6 pax room for 4,000 pesos with two beds and one extra mattress. The room was small but adequate. We were positive that the weather will cooperate because we were sweating while eating lunch. 😀 Since it was still too hot to swim, we decided to take our nap and get up at 3 or 4 pm. We woke up at 4-ish to an epic thunder =)) We changed to swim clothes quickly and went to the beach for a swim. There were thunderstorms at nearby mountains and there was static, I had to take a picture of my hair.

I was a bit scared to swim because few weeks ago, news of 5 tourists in Siargao, 4 injured and 1 dead, were struck by lightning while taking selfies on the beach after swimming. My husband was reminding me not swim as well because of this. Also stumbled upon this article way way back that’s why I was scared when I saw my hair stand up. The rest of the people in the beach weren’t that scared though and still went on swimming probably because their hair was already went and can’t them stand up. We also swam but we didn’t stayed long. I was hoping to get a bit of color but the sun was hiding and was followed by rain.

We went back to change clothes and decided to cook the ever famous sinigang by the beach. While that was cooking, we saw that the sky turned pink, purple, and orange. Summer solstice! We immediately went back to see the sun setting. My iPhone couldn’t do justice on how beautiful that sunset was.

Walked by the beach til the sun totally set and was able to catch lighting on video which I cannot upload because hello free WordPress. =)) We looked for cooked rice and bought because we were too lazy to do it and ate dinner. After that, we went stargazing back in the beach. There were lots of light from the resorts so it was bit hard to see but it was beautiful still. Ended the night super late because of endless kwentuhan.

The next day, I was determined to get some sun. LOL. So we woke up and swam around 8AM. It was a success this time. 😀 Last hurrah before leaving for the cloudy weather. I’ll surely miss the sun. =))

BITIN. I lack color on my neck and chest. Now my face is darker than them, LOL. I’d go back here and probably explore the other resorts. It was a nice, quiet weekend. Maybe because we stayed far from the night parties. 😀 On the way home, we ate at The Beanery, Dinalupihan. No food photos but it’s where the #coolkids at. 😎

See you next weekend 🙂

View all posts by christinaferrer 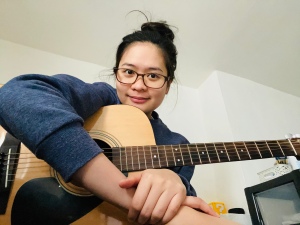 Christina Ferrer writes about  living abroad and married life. Moving countries in her 30s, she hopes to give everyone a glimpse of how it is to have a home away from home.